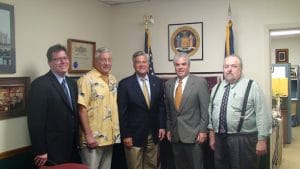 The purpose of the bill is to protect parties from litigation from irresponsible and at times, illegal service of process and maintain a high level of integrity and professionalism in the third party process server industry by requiring process servers to be licensed by the Department of State. From left to right are Rob Gillis, Administrator, Larry Yellon, President, Senator Skelos, Joel Graber, Past President and Bruce Kenney, 1st Vice President.

Ready to begin?
We are here to help you

Thanks for your message!